Age 6 First Grade: There’s a bra in my lunchbox

This is the 3rd post in a 12 week series joining
Mommy’s Piggy Tales to record my youth!

My teacher was Mrs. Conley but she got married in 1986 so all of her students after me (including my sister) know her as Mrs. Sylvester. 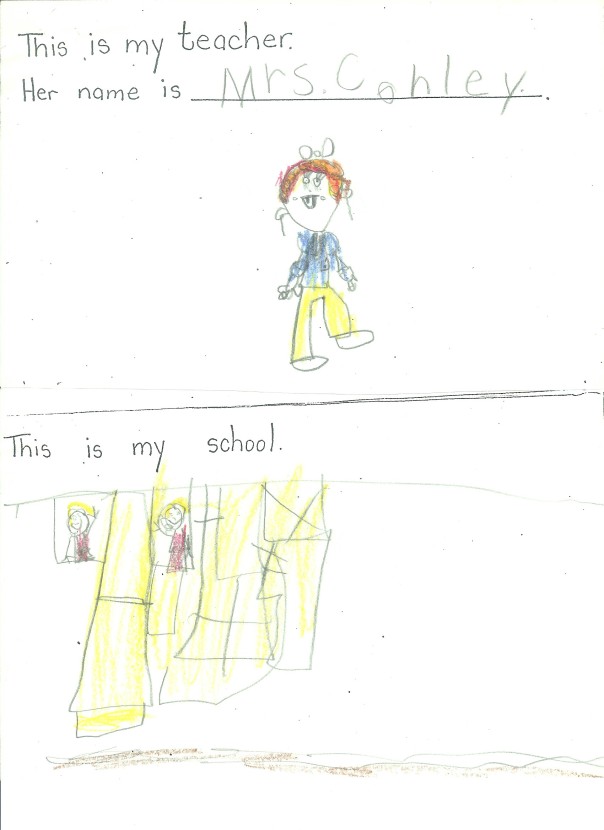 Mrs. Conley/Sylvester decorated every inch of the classroom.

Mrs. Conley/Sylvester was my most favorite teacher. I’m not sure why I loved her so much, but I did. Actually, everyone did. You can ask almost anyone in my school who their favorite teacher was and they would tell you it was Mrs. Sylvester (or Mrs. Conley depending).  The last time I saw her it was 2006, she had been retired for years at this point, and she was at a production of the school’s musical.  After it was over she was swarmed with students of all ages waiting to give her a hug (I was one of them!).  There was just something about her.  I loved her so much that I invited her to my party when I graduated high school…and she came!  Anytime that I saw her she always remembered me and knew my name.  She still called me Jenny even though others had been calling me Jenn for years.

Here’s a school project that I found. I must’ve written it in 2nd grade, but it happened when I was in first grade. Please enjoy, “A Ghostly Tale”.

What? Isn’t everyone’s mom a disembodied head? No? Hmm, must just be mine then.
This drawing of my family cracks me up.

+First of all, I have no idea why I drew my dad wearing a top hat. Maybe I drew this during his brief stint as a chimney sweep (I know that ya’ll think that’s a joke, but I’m actually serious.).
+Next I actually laughed out loud when I saw that I had drawn my grandma on the sofa. That’s were we kept her, ya know…on the sofa. Did you put your coat back in the closet? Yes, mommy. Did you put your toys in the toybox? Yes, mommy. Did you put your Grandma back on the sofa? Yes, mommy.
She really did spend a lot of time sitting on that sofa. She would somehow get up, steal your glass, wash it, and sit back down on the sofa without anyone seeing her do it. You had no idea she had even moved until you noticed that your glass was missing. She has super powers. 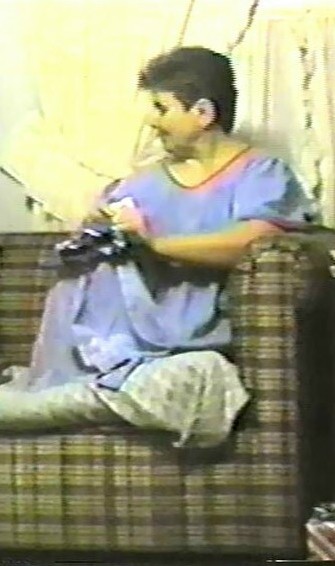 +I have no idea why my Uncle Alan appears to have, um, shall we say “ladies parts”. Maybe I’ve really blocked out a lot from my childhood, haha.  I’m hoping that’s supposed to be a bow tie, although, he never wore one that I recall.
+I don’t know why there are so many dogs and cats in this picture. We did not have any dogs or cats.
+I’m not really sure why my Aunt Clare is sitting on the chair with her legs kicked up. But what really strikes me as odd is her hair. Below is a photo of my aunt around the time that I drew this. Maybe you can figure out what’s wrong with my drawing. 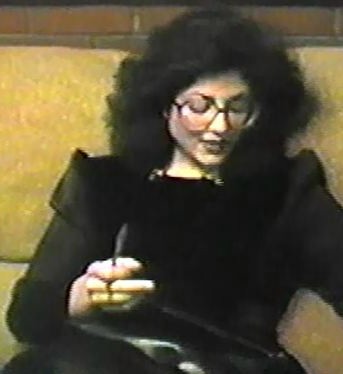 Obviously I have an incredibly creative mind 😉
Don’t trade lunches with Jenny
For whatever reason in 1985 I became quite obsessed with wanting a bra. I was begging my mom for one. She told me “no” several times. Finally, she decided that she would get me a bra. When I opened it I was so excited and I decided that I’d wear it to school the next day. That thing was awful! It was so uncomfortable I could barely stand it. I was pulling at it and scratching at myself all day long. Finally during lunch I just couldn’t take it anymore. Like so many women before me (and after me), I put my arms inside my sweater and I removed my bra without taking my shirt off…right in the middle of the cafegymatorium. One of the lunch ladies saw and came up to yell at me. “What are you doing with that?! You can’t have that in here…put that away!” So I balled it up and stuffed it in the pocket of my jean skirt. It bulged out like a huge lump in my pocket and was very obvious. I didn’t care. I was so glad to have that contraption off of my body! Once I was done eating I put the bra inside my awesome metal Popples lunch box.

My mother, being the crafty genius that she is, decided to find me the most itchy, scratchy, uncomfortable bra that she could possibly find. This way I’d be quiet about wanting a bra and I’d see that growing up too fast isn’t all that it’s cracked up to be. The joke was on her 5 years later when I actually needed a bra and she had to practically wrestle me into one! I had no desire to ever wear one again after my traumatic experience in the first grade. But that’s another story for another time.
Here’s more school work that I found. It’s not dated so I’m not sure what year this is from. What cracked me up is what I had written on the back of the paper (clearly I laugh at myself a lot).

I’m wondering if this was the same day I wore that bra to school! I guess we’ll never know.
You can read about my 6th birthday here:
Jenn’s 6th Birthday Party 1985