March 6-12 is Celebrate Your Name Week! Yesterday I told you about how our furbaby, Muppet, got his name.
Today we’ll talk about naming Adaline. 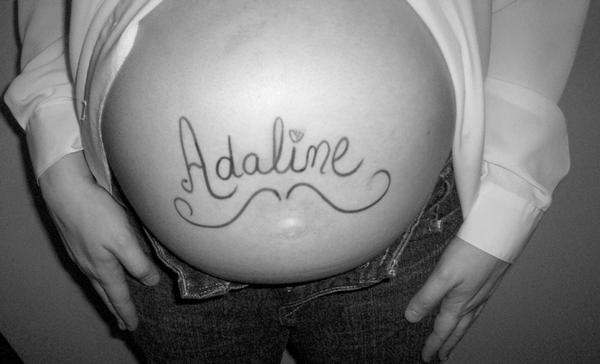 My baby bump has a sinister handlebar mustache. Don’t be jealous.

At some point during our relationship Cool Daddy and I discussed what we’d name our daughter if we had one in the future. I’m not sure exactly how it all came about, but we’d both decided that we liked the name Rebecca Paige.
We had it settled.

Time went on and on and on…and I still wasn’t getting pregnant. It took 4 ½ years of unexplained infertility before we conceived our first baby. I started looking through baby name books and searching online. I’m not really sure if I was actually looking for a name or if I just felt that it was a rite of passage that I wanted to indulge in. Although I’d never really thought about it before, now that I was pregnant the meaning of the name became very important to me. I had already felt myself letting go of Rebecca, but once I read the meaning of the name* I was pretty sure it wasn’t for me. I felt very strongly about naming the baby Hannah if it were a girl. I’d always wanted a Biblical name and now I really related to Hannah. My husband and I thought Hannah Grace would be the perfect name for our little girl (Coincidentally Hannah also means “grace”).
Just before 12 weeks I lost the baby.

Three months later I was pregnant again. Once again I began looking in baby name books and searching online. I’m not sure why. We’d already chosen names during the last pregnancy. Still I felt myself letting go of Hannah Grace. I think part of it was because it was a name I was considering for the other baby and I just felt a little uncomfortable using it for this baby. One day while my husband and I were looking through baby name books he said, “What about Adeline? That’s pretty isn’t it?” I told him, “I love Adeline! Great pick, honey!” And I put it on my short list. I was still searching but from that moment on the baby was “Adeline” to my husband. Part of me wanted to keep both Adeline and Hannah and then decide once I saw the baby. In my mind Adaline had blue eyes and blond hair like me while Hannah had brown hair and brown eyes like her daddy. Somewhere around 34 weeks I had made up my mind.
Her name would be Adaline and here is why…

I loved the name Hannah but I felt like it was becoming too popular. Everyone seemed to be named Hannah (along with many other names that I liked including Emma, Ella, Isabella, and Ava). Because of that it seemed like the significance of the name would be lost in a sea of other Hannahs. I know a little about having a popular name (says the Jennifer from the 80s with a sister named Jessica). Then there’s Hannah Montana. I don’t have any problem with the show, but it can be a little irritating if as soon as you say “Hannah” someone thinks (or says) “Montana!”. And then one time my sister referred to the baby as “Hannah Banana”, and while that’s a cute little nickname…I know my sister. She would’ve started calling the child that all of the time and getting her everything with bananas and monkeys on it. It would’ve been overkill. So that’s why I didn’t name her Hannah. (I still love the name, though, so please do not let my hang ups stop you from naming your daughter Hannah. It’s a lovely name!).

I did name her Adaline because it’s a beautiful name. I also loved that it wasn’t popular, however, similar names like Addison and Madeline are popular. This would mean that plucking the name Adaline out of the early 20th century wouldn’t seem as foreign with similar sounding names being popular. She would also have the option of going by Adaline and being a little more unique or going by Addy like the other Addy’s and Maddy’s she’ll likely encounter. (There was no way to make Jennifer more unique. Unless you go by Lola, which isn’t Jennifer at all actually…so it doesn’t count.). We gave her the middle name “Rose” simply because I thought it sounded beautiful (and roses are my favorite flower, but it has nothing to do with the name selection). Other middle names that we considered were Grace, Joy, and Jayne.

*Meaning of the name Rebecca: To bind, to ensnare, tied, captivating, knotted chord
(I still think Rebecca is a beautiful name.)

How did you choose your child’s name?
Tell me your story in the comments!

Other “Celebrate Your Name Week” Posts:
+How Muppet got his name
+How Adaline got her name
+The meaning of Adaline’s name and why I spell it wrong