Okay, I’m ready to talk about it

A year ago today I lost something very special to me. I lost LOST. For those of you not in the “know”, LOST was a 1 hour drama on ABC from 2004-2010 about a group of people stranded on a mysterious island.
(*Spoilers contained in the link*)

I’m not a person that gets super into tv. We don’t even have real cable anymore. I first saw LOST during the second airing of the first episode. I was flipping and didn’t see anything on. I came across LOST, which I had seen previews for. The previews didn’t really tell you anything about the show and I thought, “That’s probably going to be a really stupid show.”, but I knew that Dominic Monaghan was in it and being a huge Lord of the Rings fan I figured I’d watch it.
And I was hooked.

For me it became one of those “never miss” shows. I recorded episodes while I watched them (with a VCR because I’m all fancy like that. I know you DVR people are jealous.). I never missed an episode. I would remind everyone that I knew, “Don’t call me while LOST is on.” My husband, who was equally interested in the show, would sometimes forget while he was working and call me only to hear me answer, “LOST is on, this better be an emergency!” I visited LOST related websites and followed forums (though I never posted). I was all about LOST. The fact that a year later I still remember the exact date that the finale aired proves that I was more than a tad involved. 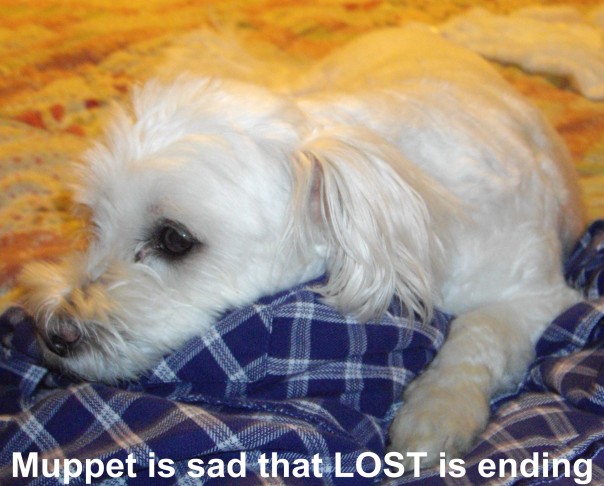 Part of the appeal of LOST was that it was a mystery show. There were many storylines and while one episode may reveal an answer it would also raise three more questions. It was one of the best and most frustrating aspects of the show. Many people had theories and ideas and others, like me, didn’t try to figure it out and just went along for the ride. If you’ve never seen LOST it’s near impossible to explain to you what it was about. If you’re a person that gets easily confused and can’t pay close attention to characters or multiple storylines you would be completely LOST. And many were…yet they watched it anyway. I personally never had any trouble keeping up with the plot and I loved every minute of it.
Well, every minute up to the last season.

While I wasn’t a LOST theorist I was still very interested in getting answers. It’s part of the reason why I never theorized to begin with. I wanted to see where the writer’s were going with it. I couldn’t wait to see what they had created and how it all came together. But guess what. They didn’t tell us. No answers. They just left us hanging. Sure they answered some questions…but not all of them. The final season itself raised more questions than ever before! Up until the last episode I was still holding on to the hope that they would tie it all together in a pretty little bow and I would be amazed at their brilliance and at the same time go, “Oh my, yes…that makes so much sense.” But no, it did not happen. 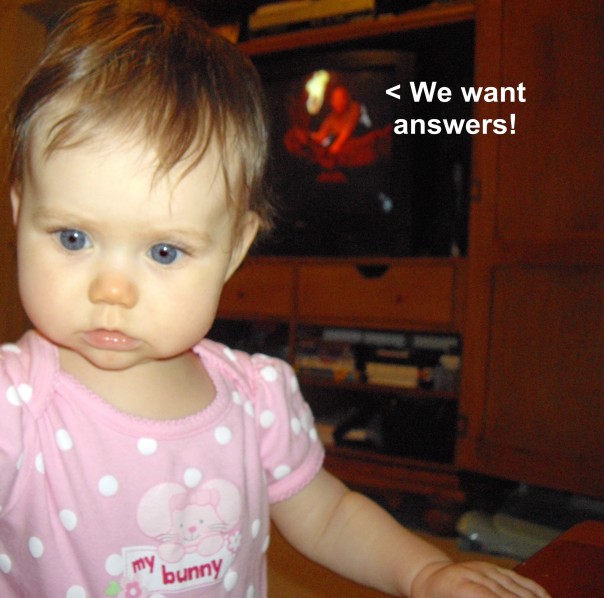 I’m sad that my show ended. I do miss it. But it’s more than just missing a show that I enjoyed. For me I feel like the show was cancelled in the middle before having a chance to work out the plot…but it wasn’t cancelled. They ended it like that on purpose. I felt a little cheated to be honest. It’s not about the finale (even though it’s definitely one of those love it or hate it kind)…it’s about how they ended the series as a whole. If they had more episodes that answered questions and explained what was going on I would’ve been fine with the finale. It’s like someone ripped out the last chapter of a book and I can’t find a whole book anywhere, all that’s left is a bunch of people theorizing how it really ended.
Not cool, dude, not cool.
This blog explained it really well here.
(*Spoilers contained in the links*)

Don't let the smiles fool you, I was dying inside 😦

Am I little jaded? Maybe. (Okay, yes, definitely.) On one hand I still love the series and I’ll still call it my favorite show. But I haven’t gone back. Since the finale I haven’t re-watched any of DVDs of previous episodes, or read any forums, I didn’t even bother to buy the last season on DVD. It only reminds me that I’ll never know and I think that really stinks. It’s been one year since the finale and I feel like you do a year after a break up. You think about all of the good times and how in love you were and how much fun you had and it makes you smile and then you think about how your heart was broken and it just makes you sad.
Yep, my heart was broken by a tv show.
Well, by a tv show and also by ice cream.

Have you ever been disappointed by a tv show?
Tell me in the comments!

If you’ve never seen LOST but you’re thinking about watching it now…please don’t let me stop you. In fact, I encourage you to watch it, it’s a great show. You’ll be going into it with the advantage of knowing that there will be some things that will never be explained. Maybe you’ll enjoy it more because of that.

Posted on May 23, 2011, in Uncategorized and tagged LOST. Bookmark the permalink. 6 Comments.