*Writing a letter to Santa to mail or email can be a memorable family tradition using my tips and ideas for making the experience special. The “Dear Santa” series will tell you everything you need to know about writing to Santa. Please subscribe to receive email updates.*

In 1984 I wrote a letter to Santa when Cabbage Patch dolls were the must-have toy of the year. While looking through some of my memorabilia I found a typed story that my paternal grandmother had written about my letter to Santa that year. Here is the story in my grandmother’s words:

THE BIRTH OF MY PREEMIE

I am a grandmother with three grown children and three grandchildren. I am also a serious Precious Moments collector. And although my kids think Mom has gone bananas, I have over one hundred Precious Moments to help me relive those very special precious moments that are but a memory when our children grow and leave home. To add more fuel to the fire of their minds that told them Mom is stepping off the deep end, I announced to everyone that I wanted to adopt my own Preemie: Not one that belonged to my granddaughters, but one of my very own.

As an avid Precious Moments collector, I have become accustomed to looking for those hard to find-just have to have figurines. And so…my search began. Sear’s, Penny’s, and Montgomery Wards were all among my list of places to call in my unrelenting search for my very own Preemie; but my pleas fell on deaf ears. They wouldn’t even take my order! I followed every lead, every hint of a lead, only to be disappointed time and time again.

Disappointed, but not yet defeated, I continued my search. My desire to adopt my very own Preemie prompted me to call my two daughters, who live in Florida, to have them place orders there. They did so, but again, no promises. No closer to my goal, the summer ended.

The holidays were upon us. In November our local newspaper was printing letters from children to Santa Claus. My two granddaughters, Jenny, five, and Jessie, four, insisted that I help them write their letter to Santa. Now, the newspaper, having been flooded with letters from anxious children said they had all the letters they could print for the remaining days until Christmas. I explained this to the girls, but they, like their grandma, were persistent. I, being a grandma who loves and spoils her grandchildren, gave in. I sat with pen and paper in hand and they began telling me what to write, …”We would like Cabbage Patch dolls, and please bring Grandma a Preemie too”. There, it was done! The girls, however, wanted to go one step further, “Mail it in Grandma. Please!” were now the words I was hearing. Even though I was sure that the letter would not get into the paper, how could I resist those four, big, beautiful, pleading eyes looking up at me? Well, I couldn’t (a weakness I’m sure all grandmas are familiar with); to make them happy, I mailed it in.

Good news for grandmas all over the world. Somehow it worked! One week later as I was reading the newspaper, there among all of the letters to Santa, in bold type, the caption, BRING GRANDMA A PREEMIE TOO, caught my eye. They printed it! I immediately called the girls to tell them the good news. They came over and needless to say, they were very excited, and quite impressed to see their names in the paper. Of course, I was excited for them, and naturally, I received many comments from friends who also read the letter. Maybe I should have written my own letter to Santa? Oh, well…

Christmas was almost here and even though my search for my Preemie had still not seen it’s end, my oldest granddaughter, Jenny, kept telling me not to worry because she prayed and knew that I was going to get my Preemie. The faith of a child! It worked with their letter and considering I was getting no where fast with all my efforts, maybe…

Christmas came and with it, courtesy of my youngest daughter in Florida, came two Cabbage Patch dolls for my two very special granddaughters! Me? Well, thanks to my oldest daughter, on December 25, 1984, my beautiful (?), little Preemie, Jenny Lynn was born, and I couldn’t be happier. Of course, I still love my Precious Moments. 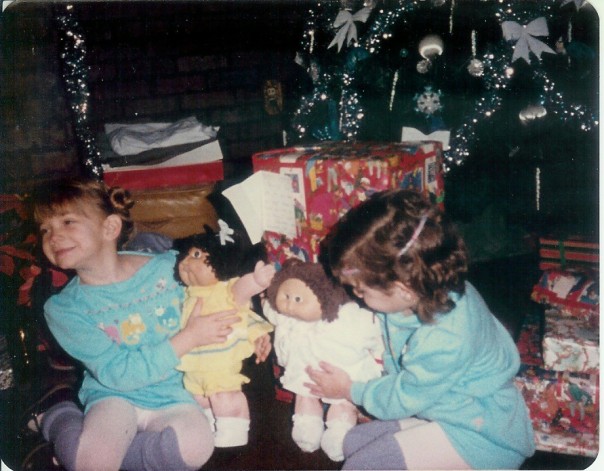 The adoption papers for my Cabbage Patch Kid 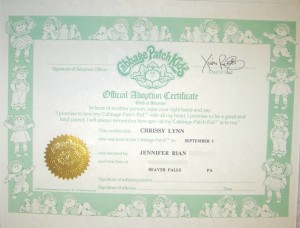 Coolest Family on the Block is committed to helping you find creative ways to have fun and make memories with your family this holiday season. Don’t miss an idea, tip, or trick…subscribe and have updates sent directly to your email!
*Subscribe via email*RSS*Facebook*Twitter*Networked Blogs*Blog Frog*