Cool Daddy came up with the idea of having an Ugliest Christmas Sweater competition for our Christmas Eve celebration. It sounded just like the weird sort of thing our family would love, so I agreed and we made our plans. 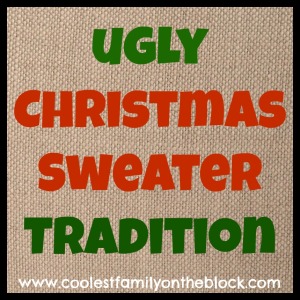 On Christmas Eve Cool Daddy and I hosted The First Annual Uncle Ugly’s Christmas Sweater Jamboree. Everyone in the family participated except for the babies since we figured that a tricked-out sweater might be a choking hazard.

Here are all of the 2010 Ugliest Christmas Sweater Contestants…can you guess who won?
(The winner is announced at the bottom, so don’t scroll down and cheat! Cheater.) 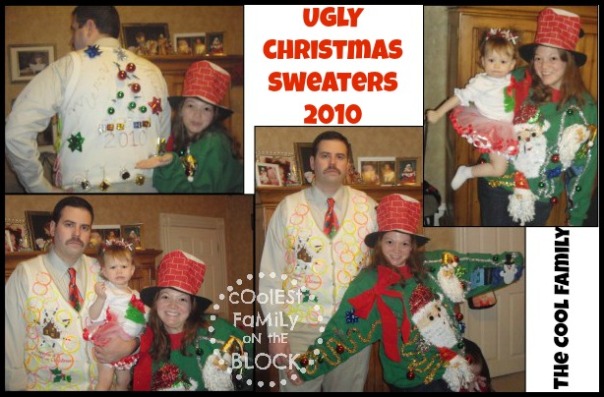 Isn’t that the ugliest Santa head?!
I found it at The Dollar Tree. What a treasure.

There were lights around the Santa head but they didn’t show up on camera 😦
My hat had Santa legs coming out of the top (so that it looked like Santa was going down the chimney), but the legs kept flopping over, so it just looks like I’m wearing a brick-print top hat 😦 .
Still awesome, but not quite the same. Sigh.

There’s lights on the front and back (but again, they’re hard to see) and it’s covered in glow sticks. I’m not really sure why.
He’s wearing a Christmas tie that plays Jingle Bells (um, awesome, anyone?).
He purposely shaved off his goatee to have his creepy mustache compliment his sweater.
You better believe it was gone before the night was out. *Shudder* 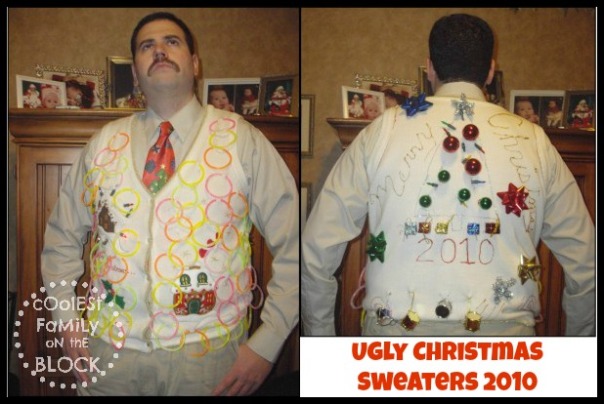 So my sister waited until only a few days before to get her sweater together. Then decided that she couldn’t find anything (that she was willing to pay for), so she turned a shirt inside out and wrote all over it with a Sharpie. Um, okay.
She did even less for her husband having him wear an old sweatshirt, which for some reason he decided to fold up into a mid-drift. Sure. 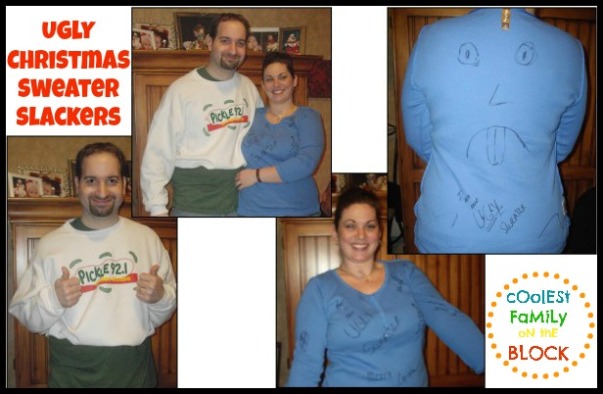 I wised up when taking the picture of my mom’s sweater and turned off the flash so that you can see her lights. The lights on her sweater were sa-weet! They were shaped like stars and changed colors!
(P.S. The tinsel on her sweater forms a Christmas tree…in case you couldn’t tell.)

Oh Christmas Ben, Oh Christmas Ben, how lovely are thy sweater…
My cousin Ben is sporting a Christmas tree sweater, complete with presents for shoes. A jingle bell fur collar adds musical appeal while tinsel and Christmas trees on the back make sure that you have a Happy Holiday from every direction. Oh yes. 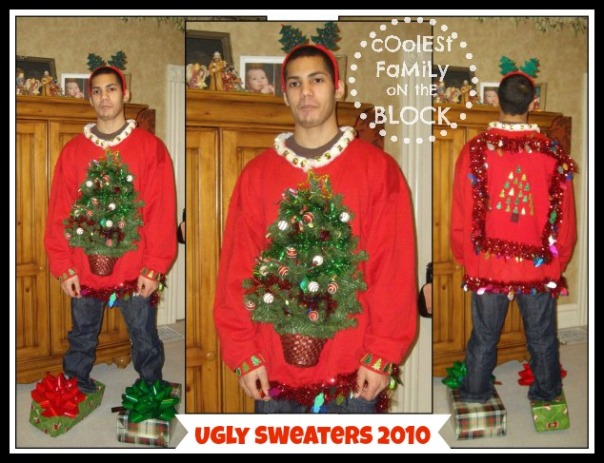 On the first day of Christmas my true love gave to me,
a peacock in a pear tree…

Okay, so I think that my cousin, Aunia’s, sweater is actually kinda cute. And I would totally wear it to the grocery store peacocks on the shoulders and all.
(Then again I would wear my totally rockin’ Santa sweater to the grocery store too because I’m super weird and have no shame…)

She’s stylin’ with a pear tree on the front of her sweater, peacocks on her shoulders (because apparently partridges are hard to come by) and feathers on the sleeves.

My aunt, A.C., is trimmed in lovely green tinsel and featuring giant candy canes surrounded by puffy balls.
My uncle, U.A., is wearing a sweater that I originally thought was a reindeer head…and now I think might be a clock. Not really sure.
Either way, my favorite part was that he had real mini candy canes in the stockings. Tee-hee 🙂 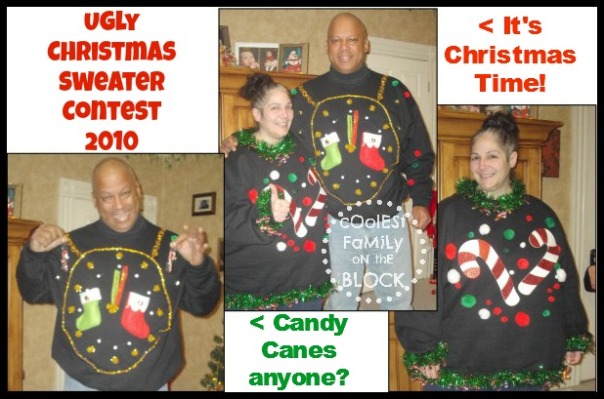 Now’s your last chance to pick your winner
before scrolling down to see the results.

My brother-in-law, Matt, won the title and bragging rights for Most Naturally Ugly (unaltered) Christmas Sweater because he had the only unaltered shirt…even though it wasn’t Christmas-y. But my sister said that it has red and green on it so it counts. I guess.

Ben won the title and bragging rights for overall Most Festive Attire.
Wearing an entire Christmas tree on your chest will do that.
Have a Holly Jolly Christmas.

My very own main squeeze, Cool Daddy, rose victorious as the Ugliest Christmas Sweater Champion.
I think we all voted for him because we were so creeped out by the mustache.
And we wanted it to go away.
Very quickly.
And never return.

And this is supposed to be a picture of Ben sad because he didn’t win the trophy, but the sad picture that I took of him ended up being really blurry and so I used this one instead wherein he is kinda smiling and holding up one finger even though he was very sad and truly tortured to the very core of his being for not having won the trophy and he must be pretending that he is number one in order to make himself feel better and not cry in front the entire blogosphere. I thank you for not laughing at him during his hour of great pain and distress.
(Nothing says, “Feliz Navidad!” like a good nonsensical run-on sentence.
You are welcome.)

Which ugly sweater is your favorite? (Mine!)
Let me know in the comments! 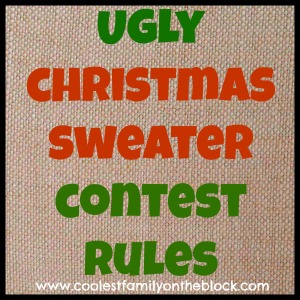 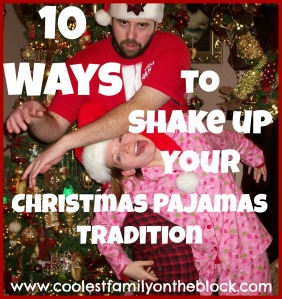