Is that an Earthquake or is my cell phone on vibrate?

Disclaimer: This blog post is about The Great East Coast Earthquake of 2011. It is also a gross overshare of all natural disasters I’ve experienced thus far. Prepare to be bored horrified, shocked, and amazed.

Yesterday while my husband was at work and my daughter was with her Grandma, I was sitting in my bed in good ‘ol Beaver Falls, PA enjoying some cake (because I work really hard and all). My dog had just run inside of his cage so that he could scratch his ears (I guess he wanted some privacy??) While he was scratching his ears I started to feel the bed move…in rhythm with his scratching. Being sarcastic as I am, even if I’m alone with no one to share it with, I thought to myself, “If he’s scratching his ears so hard that it’s moving this bed that’s going to be one big vet bill.” And then the shaking got ever-so-slightly stronger and I actually began to think that, as crazy as it might be, maybe a stray dog had somehow gotten underneath my bed and was also scratching and it was making the bed move…that was not sarcasm it was a brief, real, albeit stupid, thought that I actually had. Then, ever-the-analytical thinker, I began to think that maybe I should stay very still and assess the situation. The bed was moving ever-so-slightly and I could hear the rustling of the piles of crap that I need to clean off of the dressers. My conclusion: “Why, Pa, I do believe we just had us an earthquake.” And then I went back to eating my cake.

A few minutes later my mom called from work. She asked me if I’d felt the earth move and I told her the whole riveting story…the cake, the dog’s ears, the rustling piles of crap. (It’s the details like these that make me such a good storyteller and why 10s of you keep coming back to my blog for more. You recognize that talent and I applaud you for it.) After I got off of the phone with my mom and (sadly) finished my last bite of cake, I made my “I survived the shiver of 2011” presence known on Facebook and Twitter before calling my hubby. I called Cool Daddy and asked him if he’d survived the earthquake and he had no idea what I was talking about. So, I once again filled him in with all of the exciting details this time including all of the dramatic accounts from my mom’s office as well. He hadn’t felt a thing. He did call back later to say he’d watched the surveillance video and saw the camera shaking. Ooooo…ahhhhh.

For those of you news hounds who want the real scoop, here’s the deal…
A moderate earthquake hit Virginia Tuesday afternoon and the tremors were felt hundreds of miles away. The epicenter of the 5.8 magnitude earthquake was about 87 miles outside of Washington, D.C. around 1:51 p.m. source
…and scene.
That’s it. Everyone’s fine although many freaked out…not really sure why (let’s all calm down, people). I don’t even have any crooked pictures (at least not any that were straight before the earthquake). A few weeks ago we had a thunderstorm in the middle of the night and that shook the house more than this earthquake. And it was super loud at 4am, not something I really appreciated. Still not scary, but concerning enough to make sure my laptop was unplugged in case lightning struck…priorities, you understand. 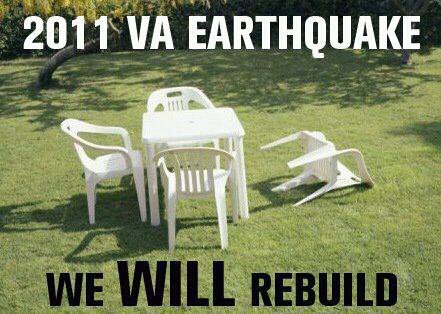 (Note: I would like to credit this photo, but it has gone viral in a very short period of time and I’m unable to trace the original source. If you know the source, please let me know!)

Maybe I was so calm today because I’d been through this before. In 1986 when I was in the first grade my teacher set her purse in front of me and asked me to watch it while she left the room for a moment. She walked out and shortly after that our desks started shaking. It felt very similar to what I felt today. I don’t remember a single thing falling or tipping over and I don’t really remember any of the kids crying or getting upset. We all thought it was pretty cool…or at least I did.

The January 31st (1986) earthquake struck just before 11:47 a.m. Eastern Standard Time. Although early media speculation had the epicenter located from Columbus to southern Canada, the U.S. Geological Survey quickly determined that the epicenter was east of Cleveland, and within a few hours the epicenter had been accurately located in southern Lake County just north of the Geauga-Lake County line. This Richter magnitude 4.96 (commonly rounded to 5.0) event was felt in parts of 11 states, the District of Columbia, and southern Ontario. Most of Ohio and western Pennsylvania experienced particularly strong vibrations that were noted by numerous individuals. The Division of Geological Survey received hundreds of telephone calls in the hours after the earthquake as did numerous federal, state, and local agencies. source 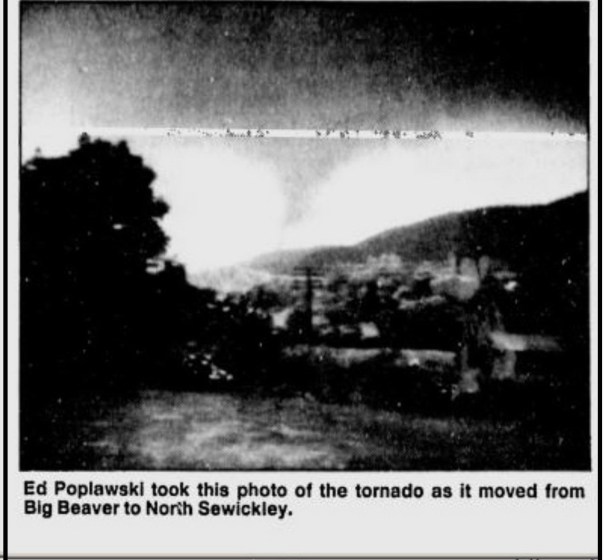 At the very end of Kindergarten on Friday May 31, 1985 there was a tornado here in Western Pennsylvania. Fridays were paydays and when my dad would get home from work we would all head up to The Big Beaver Plaza to go shopping at Jamesway (like a K-Mart or to reference some stores that are no longer in business: like a Hills or Ames). For whatever reason we didn’t go that night. I don’t remember what time it started storming, but I think that my sister and I were already in bed. Our dad was running around gathering flashlights, batteries, and radios. He said there was a tornado coming and we needed to get into the basement. Now we surely would be happy to go into our dark, dirty, cold, wet, insect-infested basement if it was going to save our lives (don’t get me wrong), but it obviously isn’t the nicest place to spend the evening. I’m not sure why my mom was so calm. I don’t know how she “knew” that we would be okay and that the tornado wouldn’t come near us. She took us out onto the porch and showed us the sky. It looked crazy, the wind was blowing everywhere it was so dark and cloudy…I don’t think that I could describe it if I tried. Then I saw (what I thought at the time was) the tornado in the distance. I’m guessing that it was just more crazy storm clouds, but I thought I was looking right at the tornado. We only looked briefly and then went back inside where we ate ice cream. I don’t remember if we ever went into the basement. Maybe my mom didn’t know that we’d be okay, but she could tell our dad was scaring us to death…so she made it fun. Who wants to go sit in a nasty basement waiting for a tornado to sweep you away? No one. That’s scary. Who wants to look at a super cool storm and then eat some ice cream? Me and my sister. 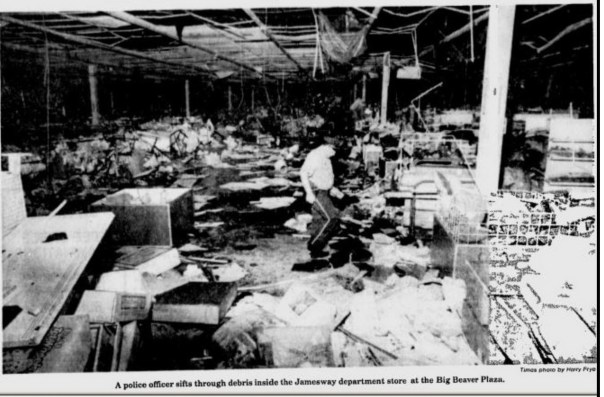 The fact of the matter is that, unlike the “no big deal” earthquakes that we’ve had, this tornado was the real deal. The terrible F3 tornado killed at least 3 people and The Big Beaver Plaza including the Jamesway was ripped to shreds. 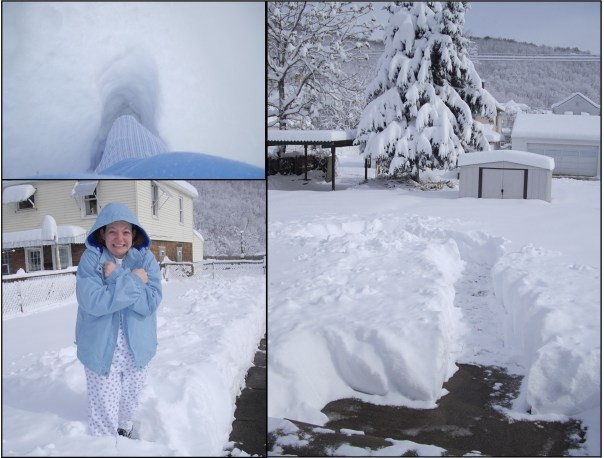 Last year we survived Snowmeggdon 2010 also referred to as the Snowpocolypse. Snow really isn’t a big deal in PA, it’s something that we expect. Still, we hadn’t had a blizzard like this since the early 90s, so some people were freaking out. The Cool Family survived the snow by having French toast and hot chocolate. 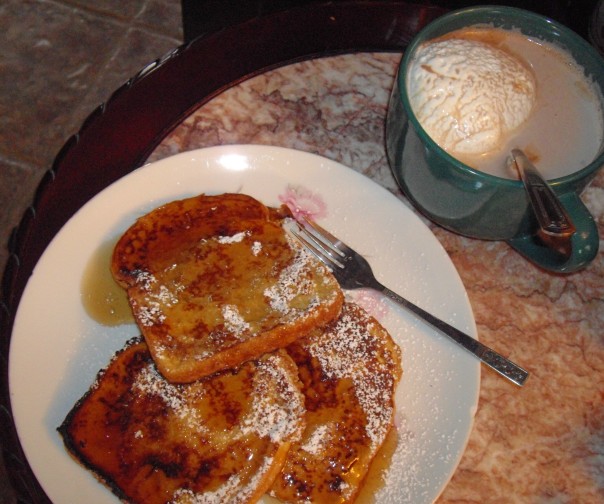 I know that you’re amazed by my ability to come out of so many natural disasters unscathed. I’m like that dude from Unbreakable ;).

Things are pretty mild here in Western PA natural disaster-wise. We’re not prone to earthquakes or tornados (although they apparently do happen on occasion) or hurricanes or floods (although flooding is probably the most prevalent of all listed). We feel a tiny shiver and people are jumping into bathtubs the way that southerners start stocking up on bottled water when they spy a snow flurry or how people in LA start building an ark if it rains. But not me. I am cool, calm, and collected.

I rock unthreatening-out-of-character natural disasters the way that Will Smith rocks saving the world from alien beings. If you’re going to have a mild natural disaster in an unlikely area you’re going to want me there to keep things calm. I will get out the ice cream and cake and we’ll all breath deeply, sweets are key when your life is (not) in imminent danger. After said mini-disaster is over we will walk outside and see that all is right with the world and you will thank me for saving your nerves during such a trying time. You are welcome. But if while we’re gazing at the sky with a new appreciation for life we notice any ufo’s coming close…you’re gonna have to call Will Smith ‘cause mama don’t play that (and I certainly don’t share my sweets with aliens).

Disclaimer: I understand that depending on where you were during the tremor that circumstances may have been more dangerous…I am simply relaying my own, personal, completely no-big-deal experience. So far I have heard no reports of injuries or significant property damage and I pray that you and yours are all well. Also, I like to bookend with disclaimers to give us all a sense of closure. I’m sure that we all feel better now.

Where were you during The Great East Coast Earthquake of 2011, and did you feel it? Let me know in the comments!