Pregnant After Infertility: My First Pregnancy

April 24-April 30, 2011 is National Infertility Awareness Week
and I’ll be sharing my infertility story with you. 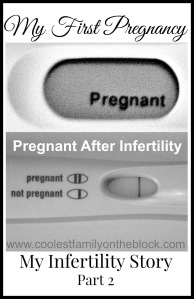 In June of 2008 we met with an adoption agency and began filling out paperwork. Two months after the last urology appointment on our 5 year anniversary (after a week of ttc) we decided that I would try taking the Crinone. So on June 21, my suspected day of ovulation that month, we used the Crinone for the first time.

Only a few days later I felt exhausted, was having breast pain, and was a little nauseous. I assumed that it was side effects from the Crinone or perhaps even early PMS symptoms. My period was supposed to come on July 5. That week I didn’t have any spotting like I normally do, but I didn’t want to get my hopes up and assumed that the Crinone was the cause.

When July 5 came and I didn’t start my period I wanted to take a pregnancy test. My husband wanted me to wait another week but since I had read that Crinone could sometime prolong a period I didn’t want to have my hopes up for a week. Although I was hoping that we were pregnant, I really wasn’t expecting to be. At 12:50pm I took a First Response HPT, the directions said to wait 3 minutes for results. I normally sit in the other room to wait, but I wanted to check the test line before leaving the room to be sure the test was okay. Before the test line even showed, the pregnancy line showed immediately with the lighter test line following a second later. We were pregnant! 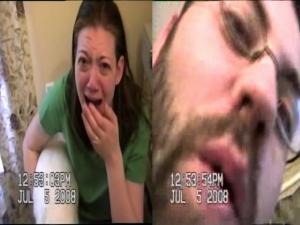 After some other errands that we had to run that day we picked up more pregnancy tests and took them around 5pm. I took one more First Response test, and two digital Clear Blue Easy tests. Every test showed a positive result within seconds. My husband and I were shocked but thrilled. This would be the first grandchild on both sides of the family and we had been trying for so long. By the time we found out that we were pregnant we had been trying to conceive for 4 1/2 years and were almost 28 and 29 years old. I was exactly 4 weeks along according to my LMP. Once we were certain that we were pregnant we had to stop pursuing the adoption since the agency that we were working with requires your youngest child to be 9 months of age before filing for adoption, we were now ineligible. 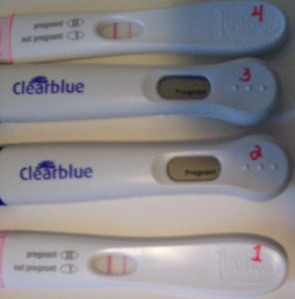 I had a physical check up scheduled with my regular doctor that Monday. While there I told her of my positive pregnancy tests and asked if I could have a blood test done. She said that with four positive hpt’s that a blood test was unnecessary and that I should schedule an appointment with my OBGYN.

Prior to my first prenatal appointment I continued to experience fatigue, breast pain, and nausea. I began to experience tailbone pain at a little over 5 weeks. I was gaining weight. The day that we found out I was pregnant I weighed 118.5 lbs, six weeks later I had gained 5 lbs. Woah.

My first prenatal appointment was on Monday August 11, 2008. According to my LMP I was 9 weeks 2 days along. My appointment was with the Nurse Practitioner rather than the OB. She did a pelvic exam and she talked and asked me questions. I had a blood test done that day for Cystic Fibrosis, but no HCG tests or urine samples. I had been experiencing tailbone pain and asked her about it. She said that I was feeling that because my uterus was tilted back pressing against my tailbone. She said that there’s nothing I could do about it and that I could try a chiropractor and hopefully it will go away because it’s (pregnancy/childbirth) very painful for “tailbone girls”.

I wanted to ask exactly when to stop taking the Crinone. Should I take it until exactly my twelve week mark or should I be taking it until 12 weeks 6 days and then stop. However, as soon as I mentioned the Crinone she asked what it was. I told her that it was a progesterone gel and that I had a Luteal Phase Defect. She said, “Well, that’s important to know.” I had assumed that all of this information would be in the chart, but apparently not. She never did answer my question about the Crinone because she seemed so distracted once she found out about it, she began asking me questions instead. She said that I should call and let them know if I experienced any bright red bleeding of at least the size of a quarter or more.

My second appointment was scheduled for September 08 when we would get to hear the heartbeat :). On Monday August 25 around 6pm I felt a small trickle. I pulled down my pants right there in the kitchen to find a dime size drop of bright red blood on my panties.