Nearly 3 weeks ago I had my 2nd OB appointment and my Nuchal Translucency ultrasound, but never got around to blogging about it because I was so busy planning Adaline’s birthday party.

On 07/27 I had my 2nd OB appointment. I had an internal exam and PAP smear (Insert sarcastic “Yay” here) and we got to hear the baby’s heartbeat. The doctor actually had a hard time finding the heartbeat. He looked around for awhile and couldn’t hear anything. Then he went lower on my stomach and said that he needed to push my uterus up above my pelvis (*Remember this for later.). Then he found the heartbeat but the baby immediately moved away and he had to try to find it again. Once he did he said that it was good in the 150s.

So, this is a picture of me at my OB appointment at just 12 weeks and 3 days.

Yeah, check out that bump that I’m rocking. And that bump? Apparently not my uterus since the doc had to push it up past my pelvic bone and whathaveyou. What that means, boys and girls, is that the adorable baby bump that I’m rocking is actually my stomach…my big, fat, stomach, that looks like it’s a uterus full of baby. Don’t let it deceive you since my uterus and baby are both hiding discreetly behind my pelvic bone. Dude, why am I so fat?! Well, at least my fat stomach had the presence of mind to disguise itself as a baby bump rather than what it actually is…an oddly shaped muffin top. This way people think I’m a cute little pregnant lady instead of an uber-fatty. Ahem.

Moving on, after getting the news that my baby bump is actually a cellulite bump I took the next logical step and went immediately to the nearest ice cream stand for a chocolate cone. I had it almost entirely demolished before getting back to the car when my hubby took this picture.

When we arrived home and were preparing Adaline for bed she wanted to put on my maternity shirt.

The following day we had my Nuchal Translucency scan. It’s a test that can only be done between 11 and 13 weeks where they measure the back of the baby’s neck to see if it’s thickened which is common in babies with Down Syndrome. They also do a blood test and these two tests together will tell you the risk factor for your baby. We just like to get an extra peek at the baby and 12 weeks is such a great time for an ultrasound because the little ones are moving like crazy even though you can’t feel it and they have tons of space to bounce around it.

I was 12 weeks 4 days at this scan (I was 12w1d at Adaline’s scan) and this baby was completely different from Adaline. Adaline moved like crazy…so much so that it took them the longest time to get her calm enough to measure her neck. She literally bounced off of the walls of my uterus and did flips and everything. This baby was very laid back. The movements were all small wiggles and hand movements, nothing big. It was so interesting to see how different this baby was compared to my daughter. Even though this baby stayed pretty still (s)he was still in the wrong position for the test and we had the opposite problem. The tech had me coughing and smacking my belly to try to get the baby to move into a different position and each time it would just fidget every so slightly as if to say, “Leave me alone! 5 more minutes, mom!” 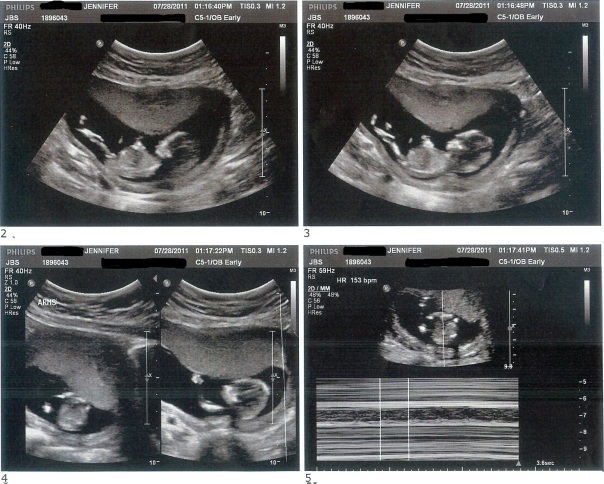 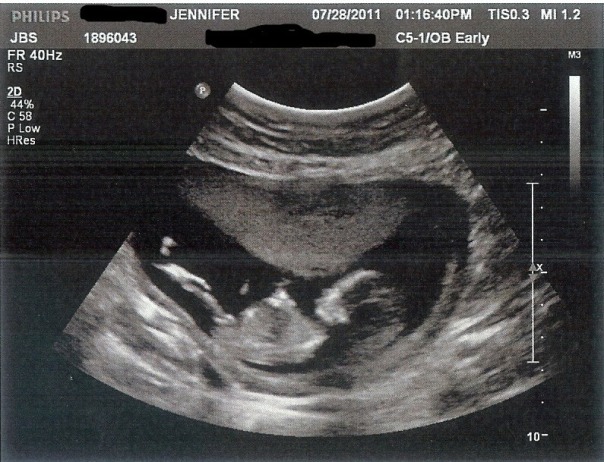 We asked the tech if she could give us and educated guess on gender. She said that if she had to guess she’d say that it’s a…boy! But she also said that it’s much too early to tell (I knew that already) and that she’s been wrong before at this point. At Adaline’s nt ultrasound they “guessed” girl and obviously they were right, but at my nephew’s nt ultrasound they also “guessed” girl and obviously they were wrong…so a nt gender guess is still 50/50. We’ll be able to find out pink or blue in mid-September.

Right after the scan they let me know that the neck looked normal but to remember that the blood test is important and then I went upstairs to have blood drawn. I’ve read online that many women get a finger prick for this test but both times I’ve had blood drawn from my arm. The hospital called a few days later to let me know that all of the test results looked normal and to give me the risk factor, which I don’t remember the exact number, but it was very low.

Here I am after the ultrasound and blood test. You can see my hubby’s reflection in the window taking the picture. 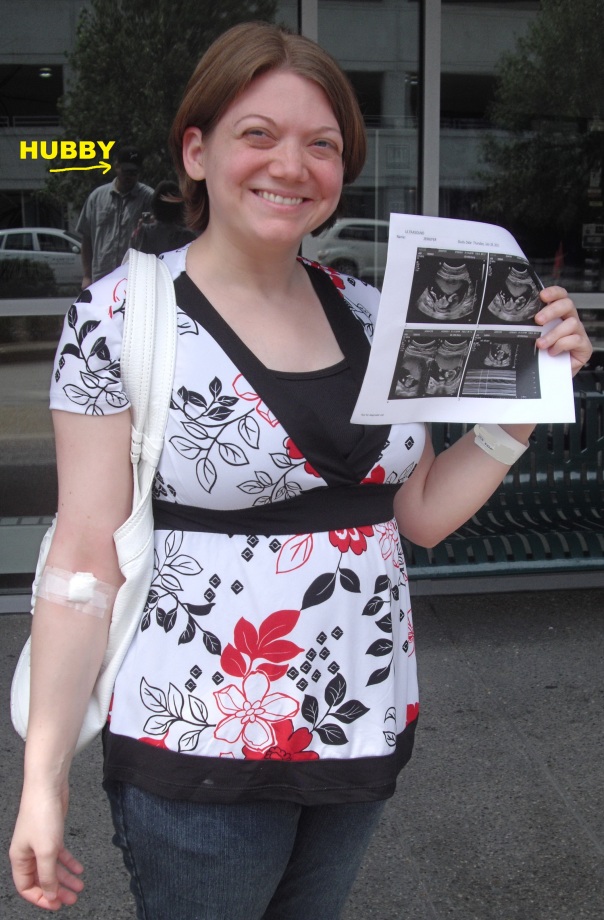 I’m now 15 weeks and officially out of my first trimester. This seems to be going much faster than my last two pregnancies which I assume is probably because Adaline takes up so much of my time the days go by pretty fast.

Here’s my growing baby bump from the first trimester. You can see that it only took me a few weeks to start growing (although again, it’s just fat ;)).
(Click on photos to enlarge.) 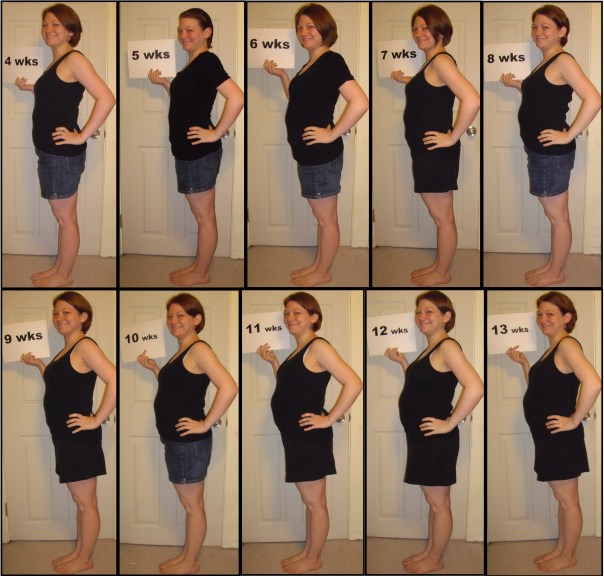 And just in case you think I’m one of those weirdos that’s stuffing my shirt…here are the bare belly shots.
(Click on photos to enlarge.) 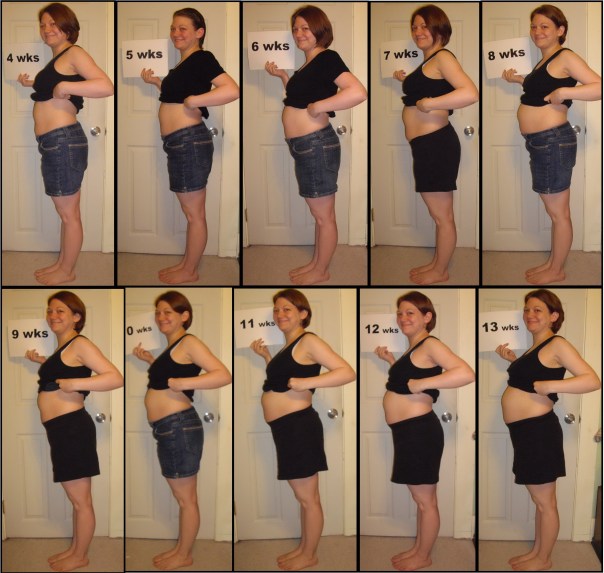 I have another OB appointment next week and as long as there are no problems my next ultrasound won’t be until mid-September.
Now you’re all caught up on the baby business.