This year the Cool Family opted for some extremely cheap, simple, and easy no-sew Halloween costumes. 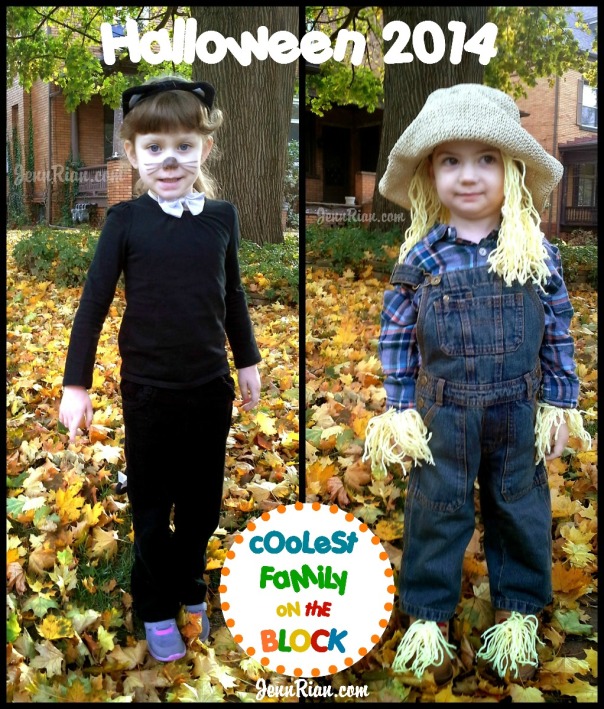 Thankfully Adaline insisted on being a Black Cat this year. I was going to go the leotard route but figured it was pointless to spend the extra money, especially if she would end up being too cold. She wore a black long sleeved shirt and black pants that she already had. We got a cat kit for $5 at Target which included the ears, tail, and bowtie (it also came with a weird nose, but it looked awkward). A little eyeliner nose and whiskers and we’re done! 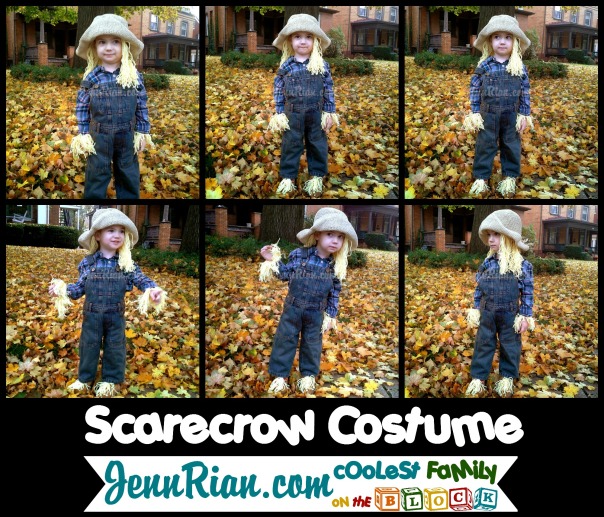 Jon wanted to be a scarecrow. The costume was simple: overalls and flannel shirt. Jeans would work as well especially if the shirt is a little longer and you could cinch the waist with some rope. For the straw “cuffs” I just tied some yard into a circle and then tied yarn around it and put it on his wrists and shoes. For the hat/hair I stuck pieces of yarn to duct tap and then safety pinned the strip of duct tape to the hat. Simple! I was going to put a scarecrow nose and stitched mouth on him, but he wouldn’t let me 😦

When I was 2 years old I was also a scarecrow for Halloween. That’s me on the left. Do you think Jon and I look alike at all? 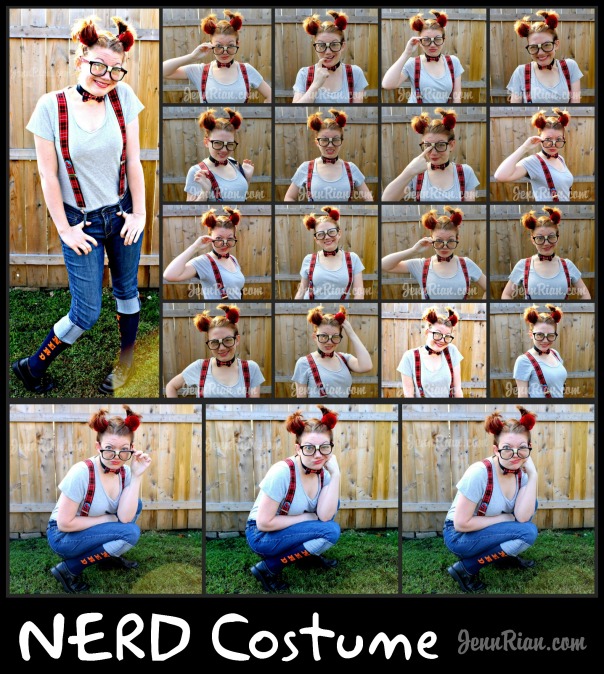 I decided to go as a nerd because I only needed a few accessories to complete the costume: nerd glasses, suspenders, and a bowtie. I will tell you that I’m not happy with my accessories at all. We went to Party City because it was closer and these were the only options. I think the glasses are too “trendy”, the bowtie is too “cocktail waitress”, and it was all pricier than I would’ve liked. After I’d already bought the stuff I found cheaper and more appropriate accessories at a Halloween store at the mall. So I’m disappointed.

Because I wasn’t entirely thrilled with my nerd costume (I hated the bowtie in particular), I decided to change it up and go specifically as a Harry Potter Nerd or a Potterhead, if you will. I already had the awesome Gryffindor t-shirt and scarf, and the round Harry Potter glasses. Yes, I already had those, just for every day use. Because, shut up.

It ended up being chilly so I wore a gold cardigan that I already had that matched perfectly and in the end I decided to wear the nerd glasses instead of the Harry Pottery glasses. Fascinating stuff, right?

Last year Adaline and Jon went as an Artist and Masterpiece.
Click for costume details.

What did your kids dress as for Halloween this year?
What’s your favorite go-to last minute costume?
Let me know in the comments!