Tis the season for Ugly Christmas Sweaters! In 2010 our family started a new Christmas Eve Tradition: Uncle Ugly’s Christmas Sweater Jamboree (which is a longer way of saying “ugly sweater contest”)! These are the sweaters from 2012. Which one would you pick as the winner? 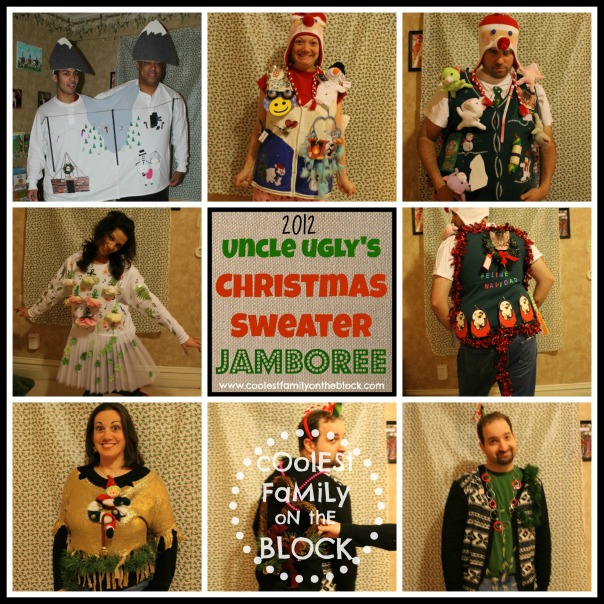 I always like to start things off with a photo of the one and only “Cool Family”. Jonathan was lucky enough to miss being in these photos because of his early bedtime. This year he may not be so lucky.

First of all, settle down. I know that you are really excited about the awesome Santa hat that I’m wearing (and you should be), but this is sweater time.
(Okay, I got the hats on clearance at J.C. Penney’s a few years ago. That’s all that I know. Get off my back.) 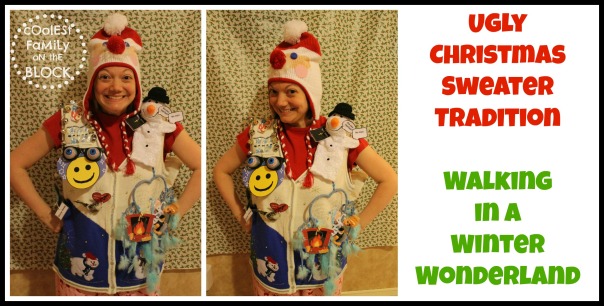 For my sweater I decided to represent the lyrics of the Christmas song “Winter Wonderland”. It looks odd and unChristmas-y from afar, but it is really a masterful work of creativity. So there.

Sleigh bells ring…are you listening? In the land snow is glistening.
A beautiful sight, we’re happy tonight. Walking in a Winter Wonderland. 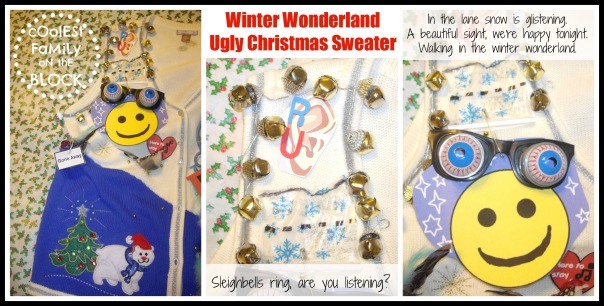 Gone away is the blue bird. Here to stay is a new bird.
He sings a love song as he goes along. Walking in a Winter Wonderland. 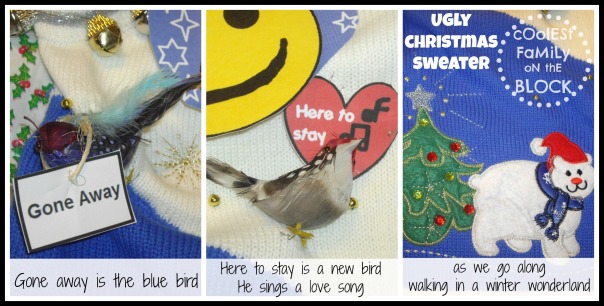 In the meadow we can build a snowman. And pretend that he is Parson Brown.
He’ll say “Are you married?” We’ll say, “No man. But you can do the job when you’re in town.”

Later on we’ll conspire. As we dream by the fire.
And face unafraid, the plans that we made. Walking in a Winter Wonderland.
(Click then click again to enlarge. “Face unafraid” is my favorite detail.)

In the meadow we can build a snowman and pretend that he’s a circus clown.
We’ll have lots of fun with Mr. Snowman until the other kiddies knock him down.

In the snow, ain’t it thrillin’? Though your nose gets to chillin’.
We’ll frolic and play the Eskimo way. Walking in a Winter Wonderland.

Okay, I’m done photo bombing this post with my sweater. Moving on…

2012 Cool Daddy finally went with a theme other than “creepy uncle”.
(Do you remember the mustache of 2010 or the underwear of 2011?
Or were you lucky enough to have Will Smith drop by and “flashy thing” those memories away?).
I present to you: “Feline Navidad“…

A Fancy Feast for the eyes, Cool Daddy’s wearable interpretation of “Feline Navidad” begins with a festive green sweater vest and ends with a cat tail made of red foil garland. Five stuffed cats of various colors are the focal point while the added details of cat toys, a pink cat collar with bell, and a package of cat nip bring this sweater to a whole new level.

A year ahead of the times, the back features an en-wreathed cat head, rivaling Miley’s 2013 “Space Kitten”. For those not quick to recognize this brilliant theme, colorful foam letters spell out “Feline Navidad”. A row of kitten quints inside of red handbags hang playfully above the aforementioned shiny, red cat tail. This ugly sweater is the cat’s meow!

My brother-in-law, Matt, is sporting a cardigan with a print that marries southwestern with ski resort. The back boasts a rustic heart shaped Christmas wreath complete with wooden gingerbread man, just like those worn by the southwestern ski bunnies of yesteryear. He accessorizes with a necklace/belt combination made from hoops and paperclips, while a mistletoe headband adds a touch of whimsy.

My sister, Jess, is a maniac, maniac on the floor and in this Solid Gold inspired ugly sweater. Shining, shimmering, splendid, this sparkly gold sweater has fringed sleeves and mid-drift. Plain green garland gives a belt-esque look, while a be-belled stuffed Santa corsage prepares you to “jingle all the way” this season.
(You have my permission to add the words “belt-esque” and “be-belled” to your vocabulary. You’re welcome.) 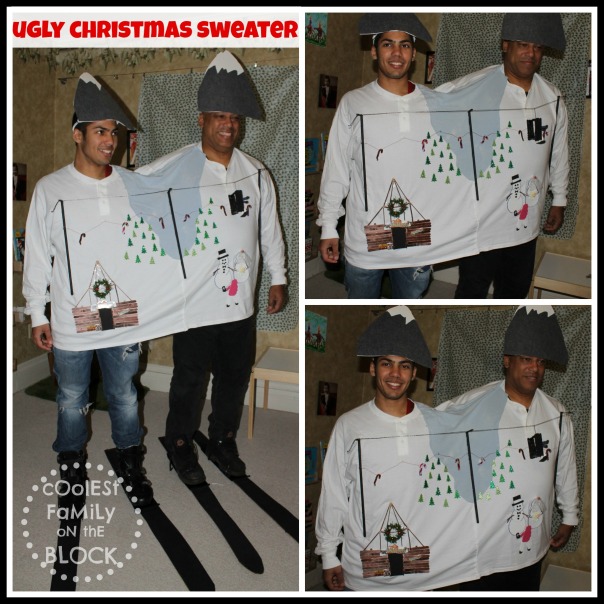 After taking a year off to reflect upon his ugly sweater goals, U.A. teamed up with his son, Ben, (2011 Ugly Christmas Sweater Champion) to bring us “The Two-Headed Ski Resort”! 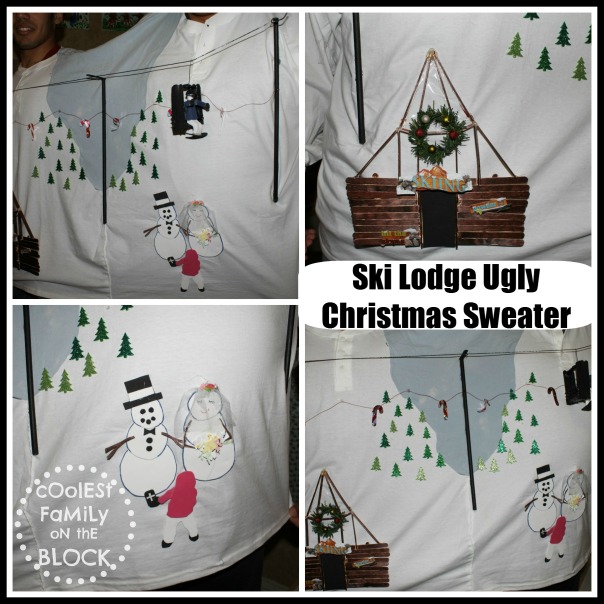 This Ugly Christmas Sweater has everything: a Popsicle stick ski lodge, a child performing a marriage ceremony between two snowpeople, sparkly green pine trees atop a snow-covered mountain, a ski lift with a tiny skier aboard, and two grown men wearing mountain hats.

Last but not least, Aunia is once again confused by the concept of making an ugly sweater. Complete with pleated skirt, her sweatery “rendition” of Waltz of the Flowers is a series of lovely flowers, charming bumblebees, and delicate musical notes. Who wore it better, Aunia (on the left), or her brother, Ben (on the right)? 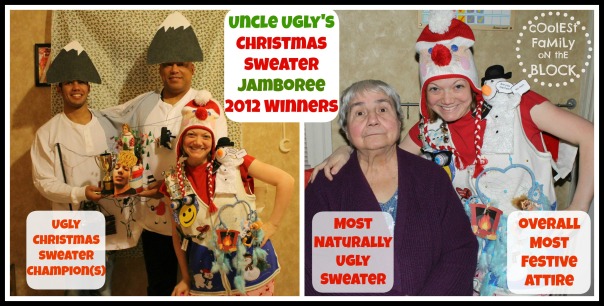 The collaboration paid off! Father/son team Ben and U.A. were named 2012 Ugly Christmas Sweater Champions, enabling Ben to hold on to the title for a second year in a row. I was given the title of “Overall Most Festive Attire”, and because everyone in the competition had altered their sweater and she was the only other person wearing a sweater, Grandma was given the title of “Most Naturally Ugly Sweater”.

I can’t wait to see what kind of sweaters everyone creates this year!

Which Ugly Christmas Sweater was your favorite?
Does your family have an ugly sweater tradition?
Let me know in the comments! 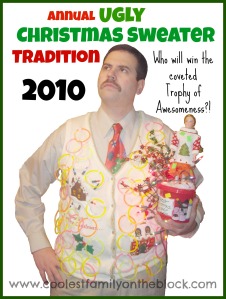 In 2010 our family started a new Christmas Eve tradition: Uncle Ugly’s Christmas Sweater Jamboree, which is just a fancy way of saying “Ugly Christmas Sweater Competition”. It was a hit and my very own Cool Daddy came away as the victorious champion!

For 2011 some contestants upped their game, others dropped out altogether (party poopers).

Let’s start things off with a group photo of the cool family. 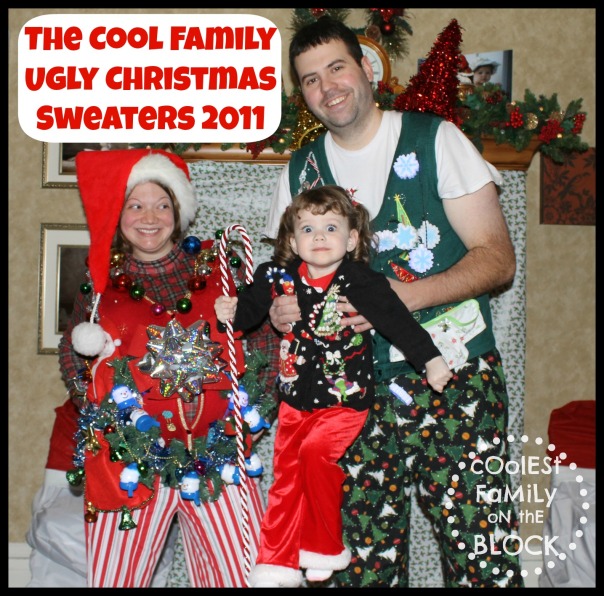 Here is Cool Daddy, last year’s Ugly Christmas Sweater Champion. We were all relieved that he chose to ditch the creepy mustache from last year.

It’s difficult to describe what’s happening with his sweater, because I honestly don’t know. He’s sporting a lovely lady’s sweater vest with flashing snowflake lights on one side and candy cane garland on the other. Look closely and you will see a gold and a red tinsel tree on either of his shoulders (blends into the background, boo!). He added some Christmas underwear from the Dollar Tree because…well, I don’t know. I have no idea why anyone would pin underwear to their sweater, but it happened. I apologize.

He paired his sweater with some Christmas tree pajama bottoms and a snazzy plastic candy cane cane. Yes, a cane cane.

Here I am rocking an ugly Christmas sweater, maternity style! I was almost 8 months pregnant with Jonathan.

I trimmed a red sweater vest with tacky multi-colored disco ball garland. My baby bump is adorned with a Christmas wreath with flashing snowman lights. The wreath is topped with double bow goodness, a giant felt red bow and a giant shiny silver gift bow. A Santa Claus stocking on the side is the perfect place to tuck the battery pack from the lights.

In 2010 my sister totally flaked out on the sweaters and barely participated. This year she wore a red sweater, which was an improvement. She altered the sweater by writing “Merry Christmas” in magic marker and attaching a baby onesie, or is it a dog shirt? She’s wearing a baby bib around her neck. Why? I don’t know. I’m confused by the whole thing. Perhaps the “bah humbug” on her shirt is the key to it all. I do enjoy her headgear which is actually a tissue box cover. 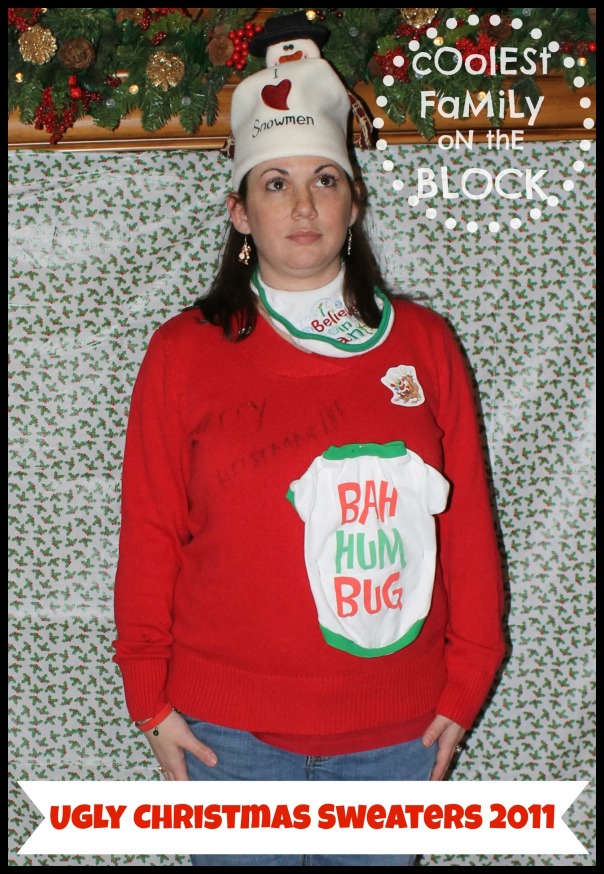 Last year after my sister dropped the ball my brother-in-law was stuck with a completely un-Christmasy sweatshirt. He did bring home the title of “Most Naturally Ugly Sweater” in 2010 because his was the only one completely unaltered. In 2011 he was in it to win it. This completely unaltered black sweater vest has charming plaid accents that add country appeal. The sweater is perfectly complimented by a turtleneck covered in poinsettias on a field of green.

My mom is stuck on Christmas in this red sweatshirt accented with puffy Christmas stickers in the shape of a Christmas tree. The children had taken quite a few of her stickers off of her shirt before I could get a picture. A sticky situation to say the least! (bah-dum-ching)

My cousin, Ben, took the loss hard last year. He had come with his game fast on, an entire Christmas tree on his chest, and presents on his feet and he still failed to bring home the title of “Ugly Christmas Sweater Champion”.

In attempt to keep history from repeating itself, Ben kicked things up a notch with this celestial beauty. A swatch of blue framed in fluffy fiber fill is the perfect heavenly background for this dollar store plastic doll posing as an angel. Perched on a tuft of cloud she is just out of reach of her harp made of Styrofoam. She is accompanied by a few other heavenly hosts and doves. Accessories include a marabou halo, angel wings, and puffy cloud shoes.

My cousin Aunia is a brick house, or at least her sweater is. Strategically placed strips of white foam on a red shirt creates the illusion of bricks. In the center sits a door decorated with a lovely lit wreath. That’s not all…open the door to find a festive living room complete with Christmas tree and presents! Ugly or adorable?

Now is your last chance to guess who was the winner of the 2011 Ugly Christmas Sweater Contest.
Click below if you need a refresher on the rules.

Just a boy kissing his trophy. Nothing to see here, people, move along.

Which sweater gets your vote for ugliest? (Mine!)
Does your family have an Ugly Christmas Sweater Tradition?

Photos and results from the 2010 Ugliest Christmas Sweater Contest are here! Enjoy the Ugly 🙂

To be eligible as an Ugly Christmas Sweater Contestant you must wear a Christmas or Winter themed Sweater, Sweatshirt, or Sweater Vest to the Jamboree. Turtlenecks and long or short-sleeved t-shirts will not be accepted. You may wear such items underneath an Ugly Christmas Sweater-vest, but it will not be considered part of your sweater and therefore not eligible for judging. You may add to or alter your Christmas sweater however you like, have fun and get creative. Additional items such as hats, jewelry or other festive attire will not be considered when voting for the Ugliest Christmas Sweater. An item must be attached to your Christmas sweater in order to be eligible.

Will any other prizes be awarded?
Contestants will also have the opportunity to vote for the person with the overall Most Festive Attire and the person with the Most Naturally Ugly (unaltered) Christmas Sweater. The winners of these categories will win only the title and bragging rights. No prizes will be awarded.

Where do I get an Ugly Christmas Sweater?
I don’t know. That’s your problem. I’ve got my own sweater to find.

Start looking for or making your Ugly Christmas Sweater right away!